Whilst Dragon is predominately a dressage horse now days he does enjoy a little jump now and then! We joined in with Miranda and Felix jump training the other day and he loved it. It’s also very good for his hocks to keep them flexing after his injections 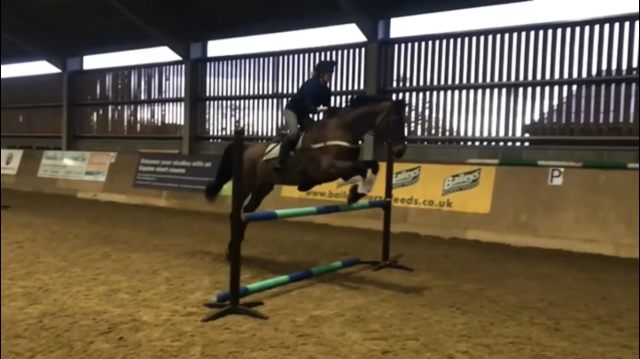 WordPress.com is excited to announce our newest offering: a course just for beginning bloggers where you’ll learn everything you need to know about blogging from the most trusted experts in the industry. We have helped millions of blogs get up and running, we know what works, and we want you to to know everything we know. This course provides all the fundamental skills and inspiration you need to get your blog started, an interactive community forum, and content updated annually.

Over this year we have been having weekly sessions in the gym to help with our rider fitness. Kindly Grainne who is on the Cycling Performance course at Writtle kindly offered her services to whip us into shape and she defiantly put us through out paces!! She helps us improve our strength through using weights and cardiovascular fitness on the spin bikes. As a result of these weekly gym sessions i have notice in increase in both my strength and fitness but also my riding. As riders it is so easy to put all the focus on the horse and forget about our own fitness and strength which is just as important!! The key aspect of riding is gaining a partnership so logically the stronger the rider i.e. increased core strength the more balanced they are therefore helping the horse become more balanced underneath us which would result in an improved performance.

Yesterday we had to say goodbye to Grainne who has been pivotal to helping us improve our rider fitness. Without her help, humour and perseverance for putting up with us we would have never got to the stage we are now. We hope Grainne will join us again to help the Academy riders next year!!

The Writtle Equine Academy this year is proudly sponsored by Birkett Long Solicitors. Today the team kit finally arrived much to all of our excitement! Both Dragon and I will be wearing it out to competitions with our heads held high to help promote Birkett Long and WUC Equine Academy. Fingers crossed to the future ahead with this very exciting partnership 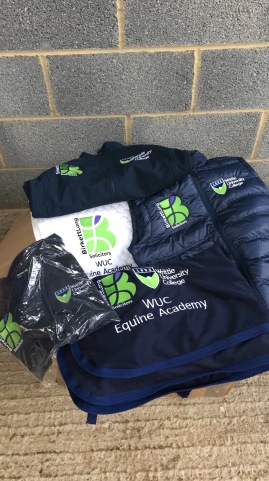 Dragon felt amazing in our training session with Jane the other day. We set out a little dressage arena with some poles to work on my ten metre circles and corners for my tests as these are the areas i lose most my marks in. We really tired to encourage him to stand up on the circles and take much more lift into his movement which made the overall picture look 100 times better. After this we then put it into practice and ran through the dressage tests for our upcoming competition.

Fingers crossed this will help to improve the marks in the lead up to nationals!!

Wow what a difference these injections have made!! Dragon is like a different horse.

He has got so much more flexion in his hocks and is tracking up again which is such a relief so we’re back on track with going to Nationals now its time to get our test nailed under the watchful eye of Jane. 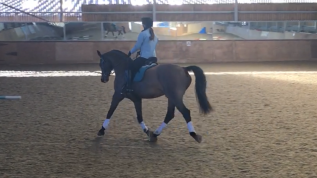 Whist dragon has been training really well recently, Jane and i have noticed that he’s not been moving behind quite the same way as he did when first arriving here. At first we put it down to use not working him as hard as being an older horse you have to make sure he is truly working from behind, but in a 4th year lecture they picked up on a slight right hind limb lameness.

After speaking to the 4th years and Rhain we found that Dragon was very sore over his SI and lumbar region on his spine so i decided to give him an easy week of hacking and a couple days off to see if this helps improve him. During this week i did some massage on him myself and used a hot water bottle on his back, all of this helped but he still wasn’t quite 100% and with nationals coming up we decided to get the Vet out to find the cause of the problem.

Eric from house and jackson came out and found that his back pain was secondary to hock issues. On a flexion test dragon was positive left hind but not right hind which made him suspicious of bilateral hock arthritis. He recommended injecting.

to house and jackson for some hock injections lets hope these help!

Dragon has settled into university life amazlingly!! He is really enjoying being out in his sand pen during the day as there is plenty of things for him to look at. He’s made new friends and his best friend Felix is the first horse he has ever enjoyed to have a scratch with!

Training has just started up and hes currently going really well. Jane’s training at the moment is really making me focus on myself as a rider and how i am influencing the way dragon is going.

After a non-conventional start to the year i’ve finally bought back my dressage horse from home Dragon. He came back with me after the Christmas holidays where we are aiming to focus on training for the National Championships in April.

Dragon is a 19 year old Holstein Gelding who has been in the family since he was 4. Originally my dads horse i stole the ride and turned his event horse into a dressage horse around 5 years ago, where we’ve come on leaps and bounds together. Our proudest moment so far is competing at the Le Meuix National Championships at Stoneligh Park in 2015 which was a dream come true and was the start to my dream of becoming a competitive dressage rider.

I hope that with the training opportunities the academy will offer me and dragon we can go to nationals knowing we’ve got the best chance of doing well!!